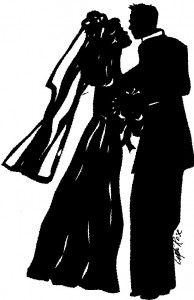 I was standing in a shadow, at a fashionable wedding at a chic restaurant, and saw a lively crowd of people in a trance.  I moved to the center, and saw who was holding their interest.  It was an elegant lady hand-cutting their silhouettes as a gift to them, from the bride and groom. She did two silhouettes of each of them—one she put in a guest book for the wedding couple, and one, she mounted on cream paper, and signed for each of the 200 plus guests.

What amazed me is that she (I timed it) did over a person per minute.  What I mean by “did” is that the silhouette artist, hand-cut each person’s profile from thin black paper, using only her vision, talent and sharp medical scissors.

More intriguing, was that she talked, laughed, and captured personality—putting the hair accessories in the artwork, adding clothing patterns into busy personalities, pearls, neck-ties, and getting the differences in triplet little flower girls. I handed her my card and asked
for an interview.

One week later.  Cindi Harwood Rose, master silhouette artist, said, “Come to Fundamentally Toys in River Oaks” where I am doing Silhouettes for cancer survivors.  I came.  She told me history, hers, and the arts.  The art of papercutting began with the Tang Dynasty in Chinese Embroidery Patterns. The silhouette, however, the black outline filled in with black interior was first seen In primitive cave drawings, and later Greek Urns.  The Greek, also would study the profile, and determine someone’s personality from it.  This study, became a rage in Germany, when a scientist named Lavatar, researched silhouette artists to help him describe features and personality.

“But your silhouettes are all beautiful,” I noted. 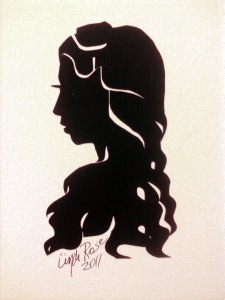 My Silhouette By Cindi Rose

“Yes,” Rose said, “I see the beauty in everyone, such as a good mother would, and the art if done correctly is beautiful. No wrinkles can show, and noses look smaller, since the ala (the part above the nostrils) does not show, which is half the nose.”

She did, all my long hair, curls, eyelashes, and a bit of an edge—my edge snipped out in about sixty seconds by this Scissor wizard. She claimed that the little white cut-outs were like white light, and that it brought happiness to individuals and to herself, the artist.

Her work, I found out, is prized by collectors of all things silhouette—for her soulful interpretations, that she adds more than the features, she captures the heart of the subject, usually donating to The Holly Rose Ribbon Foundation 501 (c ) (3) that gives free reconstruction to post cancer patients, and also helps educate the public, male, female of all ages, about cancer prevention. She has also cut silhouettes for Texas Children’s hospital for free, every year as a holiday gift to the children. She has been cutting silhouettes over 35 years.

Cindi Harwood, was born in Houston, to a lawyer, Earl, and an interior designer, Doris.  She began drawing at around 2, and trying to carve faces off chipped paint on a wall, at 3.  She said that she was reprimanded many times for these artistic ways.  At eight, she cut apart one of her dresses, and redesigned it. 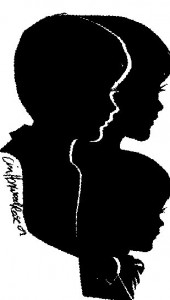 It was one that had been passed down from her older sister, Bonny, and had a little tear in it.  “I was always recreating my world,” she attested.  My mother, who could sew, fixed it back, but complimented my ideas. My mother was a paper cutter, and we would do Polish and German papercutting of little roosters, hearts, and snow-flakes.”

During that same year, she began drawing portraits, with her mom, a natural artist.  The neighbors would try to pay me for them, but I would do it, for cookies. By 16, she answered an ad, for portrait art at Astroworld, and got the summer job.  It was there, magic began for her.  She saw a silhouette artist, asked for the scissors, and cut-out a lovely silhouette profile.  It was so good, the manager fired the silhouette artist, and gave Cindi the job.  “Silhouette-cutting totally paid for my art education at University of Texas—I was able to work only summers, and we were paid commission, and in three months each summer, I would earn my tuition, art supplies, and campus living expenses, “  C. Rose, graduated Dean’s list in art and communications, and found that the silhouettes open doors and speak volumes to many, leaving a gift that lasts generations. 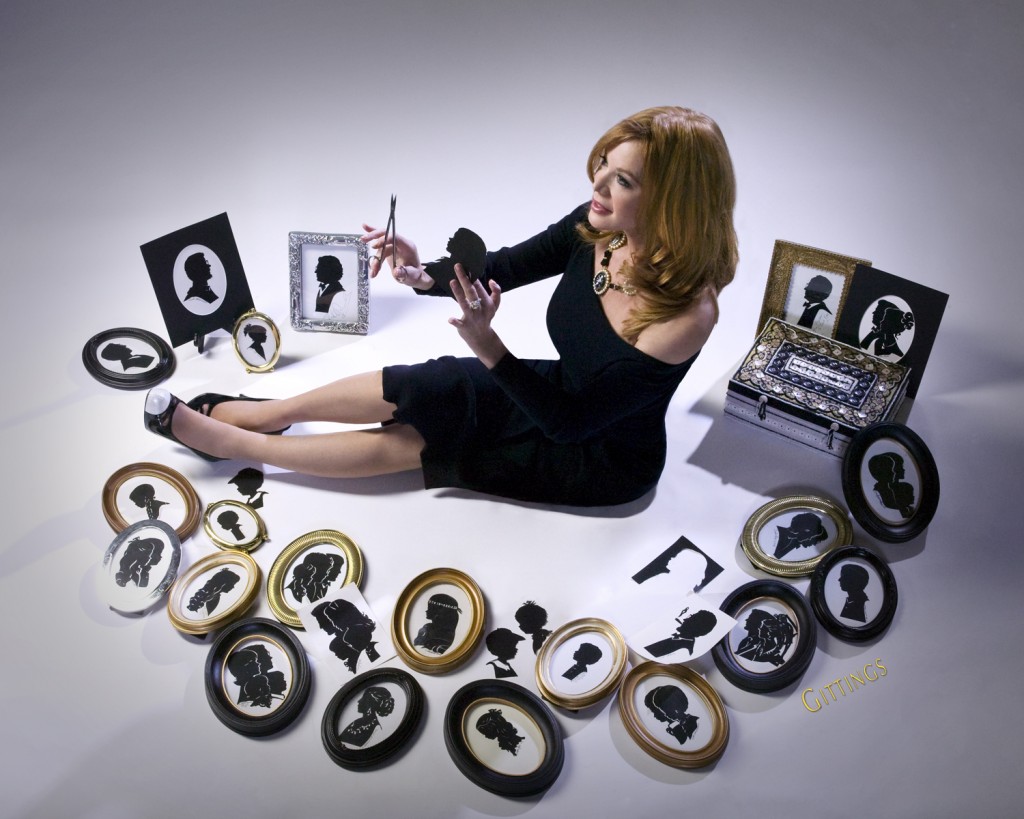