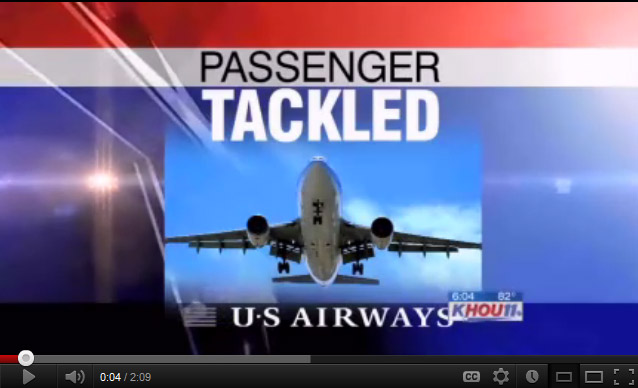 HOUSTON TEXAS—A Houston attorney is being hailed a hero after an stopping another passenger after that man began acting violently on a U.S. Airways flight on Monday.

Mid-flight, he said a man charged down the aisle and tried to ram the drink cart into the flight attendant.

“There was a guy that had grabbed the food cart and he was slamming down the passenger way,” Rose told KHOU 11 News.

Rose, who was sitting in seat 4D near the front of the plane, said he stood up and took action.

“This guy is threatening my life, the life of everyone,” said Rose. “I just got in his face and told him to try me if he thinks he can take me, and he took a swing at me. When he took a swing at me, I ducked and he clocked me in the back of the head. It didn’t hurt. I was able to swing around and get on the other side of him, and with that, I was able to help tackle him.”

From Ryan Korsgard KPRC Houston Channel 2:
“The flight attendant gets this sudden look of terror in his face and flies back about five, six, seven feet and everything just flies off of the food cart and in my direction,” said Rose.  “I hear all of these screams.  No one knows what’s going on. everyone’s thinking there’s a terrorist on board the flight.”

Rose was afraid the man would try to get into the cockpit.  He said the man threw a punch.  Rose took the man down and other passengers helped hold him until landing.  Rose said some people called him a hero.  He said he had no choice.

“I was the only person who had the ability to stop him. And if I didn’t stop him the flight attendant would be dead. He would be dead. Regardless of that man’s intentions. So, I saved a man’s life,” Rose said.

Rose said by that time, other passengers got up and helped subdue the passenger.

U.S. Airways confirmed there was an incident onboard the plane. A spokesperson said a passenger became unruly and assaulted a flight attendant.

The TSA also confirmed there was a disturbance onboard the flight.

As he boarded his flight to Houston, Rose said he received a hero’s welcome.

“They announced there is a hero on the plane and everyone was applauding me and shaking my hand,” said Rose. “It was, like, really cool.”