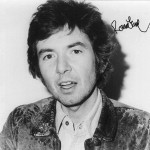 In a conversation with my friend Big Al. who is a real life angel I was reminded of my friendship with the great musician Ronnie Lane who sadly left us in the Summer of ’97.

I have had many brushes with fame in my life but meeting Ronnie had a profound affect on me and has to this day.

How I came to know Ronnie is a life lesson; we never know who we might encounter as we live our lives but sometimes people enter our lives to teach or show us something, I think that is what Ronnie did for me.

It was right after I had moved to Houston in the mid 1980’s. I rented an apartment on San Felipe and I had landed a job at a pizza parlor across the street. One day a nicely dressed young guy knocked on my door and I answered he introduced himself as Ronnie Lanes  assistant and explained that Ronnie had seen me around the complex and wanted to know if I would like to have some tea with him.

I said sure and he took me to meet Ronnie Lane. 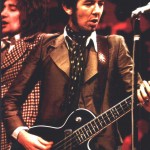 I would like to fill in some details here. Ronnie Lane was the founder of an English band called The Faces. You might know their singer Rod Stewart who would claim his own fame as a solo act. Guitarist Ronnie Wood was also a member of the Faces he would later join a group called the Rolling Stones.

I am slightly disabled well I feel it is slight others may not. I was born with a birth defect called Spina Bifida. I have had numerous operations on my back, legs, and feet. I wore corrective shoes & braces on both legs until I was 14. At the time I met Ronnie I was doing fairly well health wise and walking with a cane.

I met Ronnie in his apartment which was upstairs and catty corner from my apartment. His apartment was nicely arranged yet modest in furnishings. His guitar and bass collection were arranged in a ring around the living area, placed on stands, facing us as we sat upon two nice chairs. Beautiful photographs surrounded us many of them were band and performance pictures some from his numerous studio sessions.

This was the beginning of our relationship which would only last for that short period, that Summer when he had traveled here from England to get treatment for Multiple sclerosis at the Texas Medical Center the best in the world.

So there we were. Two strangers from different upbringings and two different countries what did we talk about? Why did Ronnie reach out to me?

Despite our differences we found out we had a lot in common, I am a musician also and it was not long before we realized we both liked a lot of the same music and a lot of the same bands. We spent time talking and exchanging stories for the most part and this would become a regular event in my life. Every week I would visit with Ronnie and we would just talk and drink tea.

Soon our meetings started getting more personal. Ronnie asked me many questions about my medical condition and I asked about his.

He told me it was the weirdest thing how the MS started manifesting itself and he did not understand at first what was going on. Now I might mention that Ronnie’s Mother and sister both had MS. His father dutifully cared for them both while he worked as a lorry driver to support the family. It still did not register with him. He had been told it was not inherited.

Ronnie told me it was very subtle at first. He would pick up a guitar and not be able to make a chord or he would reach for something and miss it completely. He was getting weaker and not able to walk as well and he started falling down.

This as you can imagine was hard to hear. It was hard to understand how such a talented and accomplished man could loose these abilities that had brought him so much fame. People loved Ronnie and I could see why as he calmly discussed these things with me. He was very gracious and never ever bitter.

He was exactly the same when he would ask me about my condition. He wanted to know about my childhood. What it was like going to school, how was I treated. I explained to him that I had a pretty normal upbringing despite my disability. Which was true. Except for my Mother calling my doctor no stop about me climbing trees, playing football, and riding motorcycles.

As the summer wore down Ronnie was contemplating a move to Colorado or Austin. His treatment here was coming to an end. Our last conversation was about who had it worse. Me or him.

I was adamant that his situation was much worse, having to deal with loosing so much ability and not getting to do the things he wanted after having so much success as a musician. His life changed it would never be quite the same.

He insisted that my situation was worse. That starting off in life disabled was unfair and at least he had the opportunity to live a lot before he found out he had MS. I told him that I did not know anything different that this was my life and I accepted it.

I never saw Ronnie again after that Summer. Meeting and knowing Ronnie was a significant event in my life. I decided to find some musicians and get a band together. When I heard Ronnie had passed I was saddend at the loss of my friend but my first CD was about to come out.

Thank you Ronnie! Thank you for giving me some perspective about myself and life I might have not had otherwise.

For more information about Ronnie Lane please visit his web site. He has a new album released; Ronnie Lane Live in Austin you should check it out. To connect with me please leave a comment or find me on FaceBook

Entertainer, Drummer, Web Developer, Web Hosting. I work with Social Media, like to help non-profits, and try to find time to appreciate the arts. WordPress Specialist
View all posts by ador →